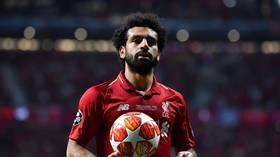 Liverpool star Mohamed Salah hit out after a mass of journalists and adoring fans forced him to miss the Eid al-Fitr celebrations while he was back in his Egyptian homeland.

Fresh from winning the Champions League with the Reds, Salah returned to home village of Nagrig in the Nile Delta to join the celebrations to mark the end of Ramadan.

However, such is the star striker’s fame in Egypt, he was reportedly forced to remain in his home and couldn’t get to the local mosque to perform prayers as the ranks of journalists and fans massed outside.

In between messages to celebrate the Muslim holiday, Salah, 26, tweeted his irritation at being confined to his house, writing in Arabic to his more than 9 million followers:

“What is happening right now with some journalists and people makes it difficult for one to leave the house to perform the Eid prayer.

“This has nothing to do with love. This is called disrespect of privacy and non-professionalism,” he added.

According to local media, Salah’s wife and his daughter Mekka were seen attending prayers with other family members, while Salah remained housebound.

The adoration of Salah in his homeland has risen to even greater heights after he clinched the Champions League title with Liverpool in Madrid on Saturday night.

Salah scored the opening goal of the game from the penalty spot inside the first two minutes, before substitute Divock Origi added a second late on.

Salah is set to help Egypt as they host the Africa Cup of Nations, which kicks off later this month.